It’s possible that the witch is a misunderstood character? 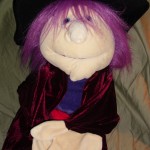 Small visitors to the Castle were very frightened of the Witch.

< She had a sweet face>  quote from the early booklets…. “a Letter from the GBC”

Few recall ever seeing the actual witch on a visit to the Gingerbread Castle. The Project Librarian secretly hopes that she looks like Brunhilde, a German puppet, who is NOT actually a witch, but rather an old crone who wears fabulous shoes.

“The witch in Hansel in Gretel, she’s very misunderstood. I mean, the woman builds her dream house, and these brats come along and start eating it. “

To quote the character Miranda, from Sex and the City, Season 1, Episode #10:

In the Opera, the one the triggered the creation of the Gingerbread Castle, the mother and the witch are played by the same person, which does not sit well with me?