The Gingerbread Castle Digital Library is the “second” Library in Hamburg, New Jersey. 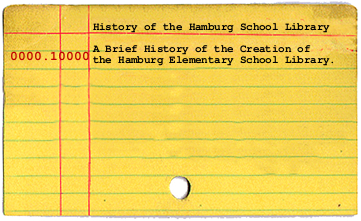 The only physical library, in the town of Hamburg is located within the Hamburg Elementary School. A few people have mentioned that there was once a private lending library in Hamburg and also a Library in the original High School, but I have not found details on these earlier libraries.  If anyone has the details on either one please let the us know and together we can tell the story of those libraries too!

Hamburg Gets Its First Official Library

One of the fourth grade teachers, Linda Pellett Lannin, was assigned the job of creating the library from scratch.   For this extra job she was paid $300 in addition to her annual salary.   To tackle the challenge, she was given one day away from her regular classes, to spend on site at the Sussex County Library, in training.

The Library training she received that day was that she was given a small book about the Dewey Decimal System as well as the names of various Library Suppliers to buy books from, as well as those little cards and pockets that you put in the backs of books.

Now she was officially trained to be the Librarian, and so she began to build the collection that would be housed in a small room near the “front office”.   Mrs. Lannin ran the library with the assistance of several student volunteers as well as a person from the community, Mrs. Alfred Perlee.

Mr. Tom Reilly was the school principal at the time. A photo was taken by the New Jersey Herald to mark this important development in the school’s history.

The library program continued this way for a while until the school hired Mrs. Shirley Fowler to takeover the job of Librarian.  Mrs. Fowler also happened to be Mrs. Lannin’s across the street neighbor; Hamburg is a very small town.

The Dewey Decimal Manual Passes to the Next Librarian 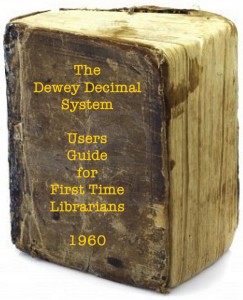 Mrs. Fowler picks up the story from this point.

“As you already know, Linda set up the library. I only had to take over from her. She’d already had the Dewey Decimal manual. She’d done a great job of organizing the collection. My job was to increase the collection and offer library services to both the teachers and students.”

Mrs. Fowler joined in 1966 as part-time librarian and also to teach physical education and health to the Hamburg girls in the upper grades.

At that time, she had no official library training, but never-the-less, armed with the trusty Dewey Manual, she charted her course.

Mrs. Fowler, now juggling multiple roles at the school, raising her family and being busy as the local Episcopal Minister’s wife, started the necessary courses for certification as a teacher-librarian.  Her previous training, prior to coming to Hamburg,  had involved teaching physical education in Vermont, as well as experience teaching French.

She recalls the professional challenges of running a small library, part-time, that also happened to be located right next to the principal’s office.  Every new idea that came upon the administration found its way to her desk. Mrs. Fowler continued to work and eventually finished her formal library training in 1969. Unfortunately, there was a funding issue involving the Board of Education and a much needed additional bookcase, and Mrs. Fowler made the decision to leave the Hamburg School and move to the County Vo-Tech High School in the role of full-time librarian.

A New and Improved Library

After Mrs. Fowler’s departure, as the Hamburg Library collection grew, it became obvious that the tiny Library space was inadequate.  Fortunately, the School embarked on a construction project to create a joining corridor between the two original school buildings.  Part of this expansion plan included the creation of a new library, built for purpose.

The newly expanded library meant greater floor space and lots more shelf space. Some design challenges, included have many stacks that towered over the heads of the elementary kids and some oddly positioned electrical outlets, detracted, but overall the increased space, however, was a wonderful and welcomed change to modernize the Library Program.  Modernization also included making the role of the Librarian a full time position.

Mrs. Fowler knows all of this because she eventually left Vo-tech and returned to Hamburg School and resumed her position as the Librarian.

The Importance of the Bookmobile 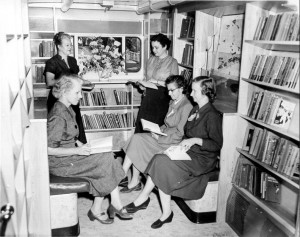 Interior of a Bookmobile

Mrs Fowler recalls the importance of the Sussex County Library System’s Bookmobile service to running the program.    Access to the Bookmobile enabled the Hamburg School to offer its students and faculty a much greater variety of materials without having to purchase these items directly.

Many thanks Linda Lannin and Shirley Fowler for helping get the Library off to a great start.